skip to main | skip to sidebar

Getting into a support type role with some developers using MySQL. One particular developer wanted to use the "LOAD DATA INFILE..." command to load some data from a text file.

I think to myself, "No problem, just grant the FILE privilege".

He tells me "LOAD DATA INFILE" still doesn't work. After a little head-scratching, I pull out MySQL by Paul DuBois and realize it only works from the server and not from the client. Doh. (Although the "Access denied" error was pointing me to the MySQL maze known as privileges).
Posted by Jeff Hunter at 11:37 AM 3 comments: 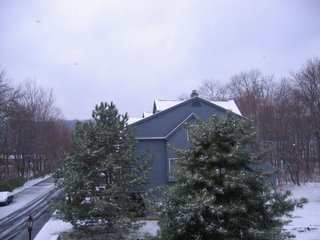 The first snow of the season always brings hope that the bad things in the year can be purified (or covered up). I'll be cursing the weather after three months of scraping the car windows and shoveling the walk, but for now, it brings hope.

The way a crow
Shook down on me
The dust of snow
From a hemlock tree
Has given my heart
A change of mood
And saved some part
Of a day I had rued.

Posted by Jeff Hunter at 7:56 AM No comments:

I find myself using maps.google.com and mapquest.com to get directions to places I don't typically frequent. If I'm going to 3 or 4 places, I find these mapping sites to be a pain because you have to get directions from point 1 to point 2, point 2 to point 3, point 3 to point 4, etc. It gets pretty tedious. I've often thought to myself, why can't I put in all my addresses and get directions?

Then I came across Map24.com. You can put up to 5 destinations and get your directions all at once.

There are a couple improvements I'd like to see to the site. First, I could only get the map to display with IE, and not every time.

Also, right now you can specify the order in which you want to visit your destinations. However, I think it would be nice to put all my addresses in and let the software calculate the order I should visit them in order to maximize my time.

Check it out, see what you think.
Posted by Jeff Hunter at 7:05 AM 8 comments:

I was reading through Computerworld the other day and stumbled upon Making IT Exciting Again, an OpEd piece by Bruce A. Stewart. Back in the heyday of the late 90's you could come up with just about any idea for a web-presence and your company would fund it. Bruce points out that in this age of slashed budgets and trying to more with less, you can focus your efforts on business goals to make your work exciting again. Sure, you'll still be trying to keep your head above water, but you'll have fun doing it.

Mr. Stewart takes two cases in his own business where he examined risk and return to help the C levels recognize people in IT have a little smarts and know more about the business than rebooting a couple computers and make pretty websites.

My own career is a little contradictory to the respective times. In the late 90's I was working for a private telecommunications company that was expanding like wildfire. Every penny was stretched and every request for anything over $500 had to go the COO. Ask for over five grand and you met with the President/Owner of the company. You can imagine the business case we had to present when I asked for $1.2 Million to buy a Sun E5500 and 800G of disk. I got it, but the business case took my manager, a reseller, and myself about six weeks to put together.

My first project at my new company in 2000 was to move one of the two instances off an Ultra 2 with six 9G disks to its own Ultra 2 with six 9G disks. We discussed transaction and data volumes and I said on day one the U2 wouldn't cut it. A month later, we were on a 4 CPU box with dedicated fibre attached storage. Today I have about 20 boxes running about 12TB of storage on a SAN. I've had to justify it, but never had to write more than an email to get it.

Sure, I got lucky. Every time I think things are slowing down, wham, we get hit with a new project. Every day is exciting.
Posted by Jeff Hunter at 10:00 PM 2 comments:

It happened again. My WAP lets me connect for about 15 minutes and then all of a sudden goes away. I try rebooting, resetting, and everything else but still no dice. I can't believe I spent another 3 hours on this last night. Time for a new Router/WAP.

Ideally, I'd like a WAP and Router all in one. The WAP would have to support WEP or some other authentication/encryption protocol since I live in a high density area. The router would have to support DHCP, which I think most do. Does anybody have any recommendations?
Posted by Jeff Hunter at 7:00 AM 6 comments:

The sysadmins did maintenance on some common NFS filesystems this weekend. Before they rebooted my workstation they saw:

If I had a dollar for every Windows PC that didn't have to be rebooted in 500 days, I'd have...nothing.
Posted by Jeff Hunter at 7:00 AM 8 comments:

Re-examining what you know

Tom Kyte has a very entertaining presentation on "Things You Know" which takes a humourous, yet logical poke at what we think we know and the methods we use to come up with those conclusions. It underlines his philosophy of "trust but verify".

As you may recall, I was searching for a DBA to fill an open slot. As with any new addition, it takes time to assess the individual's abilities and figure out how they will be integrated into the team. I constantly find myself wanting to say "That's the way it works, trust me" but try to take time to explain.

For example, the other day we were recovering a database in the development environment. To do this project we had to recreate the controlfile and do an incomplete recovery. While doing the recovery, Oracle asked for an archived redo log that was months old. We got into a discussion of how the controlfile works with an incomplete recovery, how that relates to each datafile and why Oracle may be asking for a real old archived redo log. I think my DBA learned a little more about Oracle and I learned that he now knows the function of the controlfile.

I want to instill into my team members the ability to question why things are setup as they are. Sometimes I just want something done a particular way because it needs to be done fast. However, I also don't want them to take my word because I don't always know...
Posted by Jeff Hunter at 7:00 AM 3 comments:

I've been working on a huge project the last few months. We're upgrading to Oracle Applications version 11.5.9 from a much-much-older version of 11.5. One thing that I've never liked about the adpatch program is that it is an interactive session expecting someone to be actively monitoring it's progress. For example, when applying the 11.5.9 monster patch, adpatch goes for about 6 hours and then asks the question "Do you want to continue?". Great. I left the office two hours ago and it will be about 8 more before I get back. Ten wasted hours. At least I'll know I have to stick around for six hours when I apply it to production...
Posted by Jeff Hunter at 5:15 AM 3 comments:

The blog has kind of taken a backseat the last week or so. Things at work have gotten exceptionally busy with year-end coming around and other business activity. I was the lucky chap (can Americans say that?) "on duty" this weekend and it was just one failure after another. Seventeen hours later and I think I've got almost everything cleaned up. Hang in there, I've got more coming...
Posted by Jeff Hunter at 10:20 AM No comments:

Technology at the Police Department

I had to get fingerprinted the other day at my local Police Department and I encountered some interesting technology. Rest assured, it was for recreational purposes only.

I've been fingerprinted for before. My work requires a background check and as part of the investigation your fingerprints get sent to the FBI. The last time I was fingerprinted a police officer came in with his trusty ink pad and cards. He rolled each finger in the appropriate box and you were left with a mess on your hands.

Today, it was a different story. First, the officer put my information into a computer. Instead of pulling out the trusty ink pad, he placed my fingers on a glass surface and then scanned my fingerprints. You still have to go through the same process where the officer rolls each of your fingers over the glass, but it's definitely less messy.

The only thing I was disappointed with is when you're done, the officer runs a fingerprint card through a laser printer and your prints get transferred to a standard form. Once they are sent to the FBI, they get scanned again for analysis. Wouldn't it be much easier to just transfer the images to the FBI directly? Maybe it wouldn't take 6 weeks to get the results back.
Posted by Jeff Hunter at 8:00 PM 3 comments:

Getting the next generation disk array from HP and I'm trying to figure out the best way to configure it. The EVA has a new concept called "disk groups" that I just can't get my hands around. The lowest level of storage that the EVA uses is a Redundancy Storage Set (RSS). The EVA basically groups your disks into these RSS's based on the number of disks in your disk group.

The "disk group" basically sits on top of the RSS and is a logical collection of disks. The disk group is stiped across all disks in the disk group. Each "virtual disk" (basically LUN) is then created from a single disk group and assigned a "vRaid" level. You can create as many "vDisks" in your disk group as you need. A single vDisk can not span multiple disk groups unless you use a LVM like vxvm.

The documents I'm reading (here, and here) are conflicting at best. One says that a database server should have one disk group effectively implementing SAME (stripe and mirror everything) for you. The other document says to configure the number of disk groups for the type of I/O you will encounter. Knowing that the redo logs will be sequential access and the datafiles will be a mix of random and sequential access, I think there should be at least two disk groups.

Performance wise, every fiber of my being tells me one filesystem just isn't going to cut it no matter how many physical disks are under it. Do I really want all 48 disks spinning for a 8k write?

One of my fears is that if I lose a disk group, I lose everything. HP, of course, says you will never lose a disk group. Experience on other HP products tells me the first time we have a failure, we'll get some bad advice and wipe something out. Am I just being paranoid about losing a disk group?

Does anybody have practical experience on HP EVA's that can offer some insight?
Posted by Jeff Hunter at 7:59 AM 4 comments: